My site has grown to bigger and bigger proportions over the years with more and more people using it for all sorts of fantastic purposes. This is obviously absolutely fantastic, but it also means using up resources without directly having to deal with them myself. Since living responsibly and striving to improve our planet is important to me, it was a logical step to expand this thinking to my sites. So, from this moment onward (June, 2019), I will be donating money to Eden Reforestation Projects to plant trees to offset the resources my sites use, which in turns fights poverty, restore deforested areas and protects bio-diversity, but more on this below.

My initial aim was to make sure my sites are carbon neutral as a way to return to the Earth as much as my sites are taking. It seemed like a good starting point before moving on to more, but there's a whole bunch of different data out there when it comes to how much a GB of bandwidth costs in terms of its carbon footprint. A quick Google search will give you results varying from a relatively high 20kg of CO2 per 1 GB to low ranges of 1kg of CO2 per 500 GB. There are too many variables as well, of course. Distance, the electricity source of different data centers, and so much more all come into play.
There's also different data for how much carbon the average tree sequesters. This obviously depends on tree type, growth speed, lifespan, and so on. It seems to vary between 15 to 30 kg (38ish to 70ish lbs) per tree per year, or hundreds of kilos/pounds over their lifetime.

I've decided to donate to Eden to have 1 tree planted for every 5GB of bandwidth used by my site, as well the bandwidth used by the ads displayed on my site. I feel like that responsibility falls on me rather than the ad providers. These numbers are a bit overkill when it comes to being carbon neutral, but more trees are definitely needed in many parts of the world, so better overcompensation than under-compensation.

You can keep check of my monthly donation progress (in number of trees) on my Eden Reforestation Projects profile, found here. As a way of retroactively reaching carbon neutrality for the years my sites has been in use so far, I've made a one-time larger donation.
Note that the donate button you see on my profile is not affiliated with my account, it's a generic donate button that goes directly to their cause. So my counter won't go up with your donations.

While doing research to find a suitable way to have trees planted, I stumbled upon Eden Reforestation Projects. Their approach is simple, but highly effective. In short and simplified:
- They find a suitable location and get all the logistics and legalities sorted.
- They hire the poorest of the poor to plant trees and pay them a fair, local wage. This way they also help lift these people out of poverty.
- They make sure to include tree species who offer a means of income in the future for these workers, so even after the projects are done, they can find food and income from the crops of their plantings.
- The ripple effect continues beyond to things like soil quality improvements, water purity improvements, animal habitat restoration and so on.

They've been doing this for 15 years and the results speak for themselves. Many people who were among the poorest of the poor are now able to send their children to school, for example. And because the forests they plant are planted by themselves, they're near to their heart and protecting them has become more personal.

Cost of a tree

In short, the cost to hire a person to gather seeds, care for them until they're a sapling (if required), planting it and checking up on them varies between $0.15 and $0.35 per tree depending on the planting site of the specific project part of the Eden Reforestation Projects. So with just a single US dollar up to 10 trees could be planted.
The cheapness is part due to a streamlined process and part due to the very low cost of living for the locals, which reflects in what I imagine is a relatively meager wage by our standards, but is a fair wage in their context. They're able to send their kids to school and live comfortably on their wage on Eden wages, something they couldn't do before.

The process in one site on Madagascar involves, to put it oversimplified, collecting propagules (seeds of mangrove trees), counting them, sticking them in the mud where mangrove trees used to grow, and watching them grow. This way one person can plant thousands of trees a day.
Obviously there's more to it than just this, like clearing planting sites, inventorying different species, making sure a diversity of species is planted, and so on. But hopefully this helps illustrate the perhaps surprisingly low cost of tree planting in these projects.

The Eden Reforestation Projects seems to have an eye for opportunities to incorporate other ways to help the environment within their tree planting goals, too. For example, in Indonesia they've been collecting discarded plastic bottles to be used as planting tubes in their seedling nurseries as a way to recycle waste. 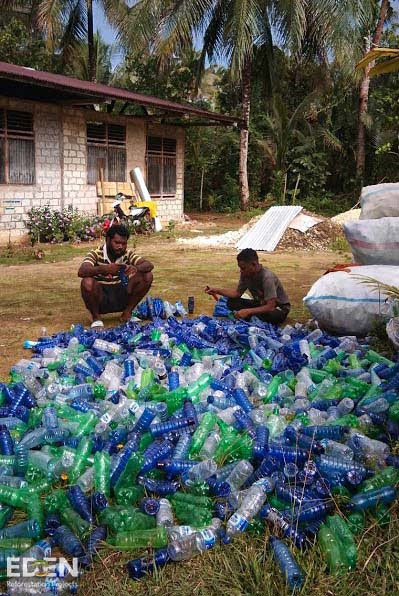 With all of the above in mind and with the partnership system already in place on their end, I reached out to them to see if a partnership between us would work for them. They agreed and here we are today. The partnership is at its core nothing more than a pledge on my end to donate money to them based on bandwidth usage and a pledge on their end to use it to plant trees, but I hope to be able to do more than that in the future. I've got ideas already, but those will be unveiled in due time. In the meantime, I highly recommend taking a look at what Eden Reforestation Projects is doing. If nothing else, it might restore some faith in humanity.

Eden Reforestation Projects has several different program levels depending on the amount of money you've donated. I'm in the seedling level, as you can see by clicking here.
The difference in levels is mostly related to the amount of exposure you get as far as social media and field updates go, but you can view them all in detail in their pdf found here.

I think it would be fantastic to combine our forces and spread trees as a geeky collective. Unfortunately there's no system in place to do so on Eden's end, so I will simply do all of it manually on my own site. So, if you have donated to Eden, send me a message with a link to your Eden profile. Adding a simple note to your information section like "FNG" or "Geeky Trees" or something along those lines can help as an authentication for larger donations, but I leave that up to you.

To showcase our combined efforts, I'll add a little sapling to indicate your general location on the map found here to hopefully showcase a world of creative folk.

There is one small stumbling block for some though. Unfortunately Eden Reforestation Projects only allows donations by credit card at the moment, rather than with Paypal as well. Paypal takes a small fee, so that's probably why.
Eden's representative has said I can be a middle-woman, so to speak, but this is obviously not ideal. Still, if you wish to support them (and/or contribute to my partnership program level), you can donate to my site and mention it's for Eden and I will pass on the donation when I make my monthly one. I'll cover the Paypal fee so your full donation still goes to Eden.

This obviously requires some level of trust and I don't expect any, but I felt it was worth mentioning this anyway based on the kindness so many of you have shown me in the past.
Either way, if you can donate directly by credit card, I urge you to do so. The cut Paypal takes may be tiny, but at $0.15 per tree, that cut could be a tree or two.

All donations made in any of these ways are both added to the map and credited on the thank you page in a special section. Both as a means to credit people and to keep things as transparent as possible.
As always you can request to remain as anonymous as you wish.